How good are you at playing Karthus?
Get insights on win rate, KDA, and other metrics on your favorite champions!
Karthus Strengths & Weaknesses
Strengths

He has a really fast jungle clear. This allows him to hit major power spikes faster than the enemy Jungler.

Karthus has tons of map pressure when his Ultimate

R is up. As long as he keeps an eye on the minimap at all times, he can use it to pick up kills easily.

Even when Karthus dies, he is still a threat to the enemy team thanks to his Passive as he can continue to use his

R briefly while he is dead.

Extremely farm oriented champ who can not recover from a set back with ease. If the enemy Jungler keeps invading him, he won’t be able to do much without his team’s help.

His playstyle revolves around power farming till he gets his Ultimate

R. This means he won’t be able to gank or counter gank early on unless it is a guaranteed kill for him.

R deals meagre amounts of damage during the early game which forces him to use it only when the enemy is too low. This can be a detriment if he doesn’t have his items or if he is set back early on.

Focus on power farming. You will need to hit level 6 as quickly as possible to unlock your Ultimate

Once you’re level 6, keep an eye on the minimap and the enemies health bars. Whenever your Ultimate

R is up, you’ll have global map pressure.

Play safe in the early game. You need time to come online and if you fall behind, you will struggle to farm and you will delay your first major power spike.

Powerfarm in the mid-game. You need to earn as much gold and XP as possible so you can level up quickly.

Try to secure objectives like the Baron and Dragon. Karthus can take objectives fast thanks to his

Look for picks with your

W and your Ultimate

R. Catching someone out with your

R in the late game. It deals tons of damage and you need for it to be up before committing to a fight.

Stick with your team in the late game. Getting caught out will result in your team having to play 4v5. As you’re the Jungler after all, if you die when the Baron’s up, the enemy will take it for free.

Rush objectives as soon as they spawn. You should be able to take them fast thanks to your 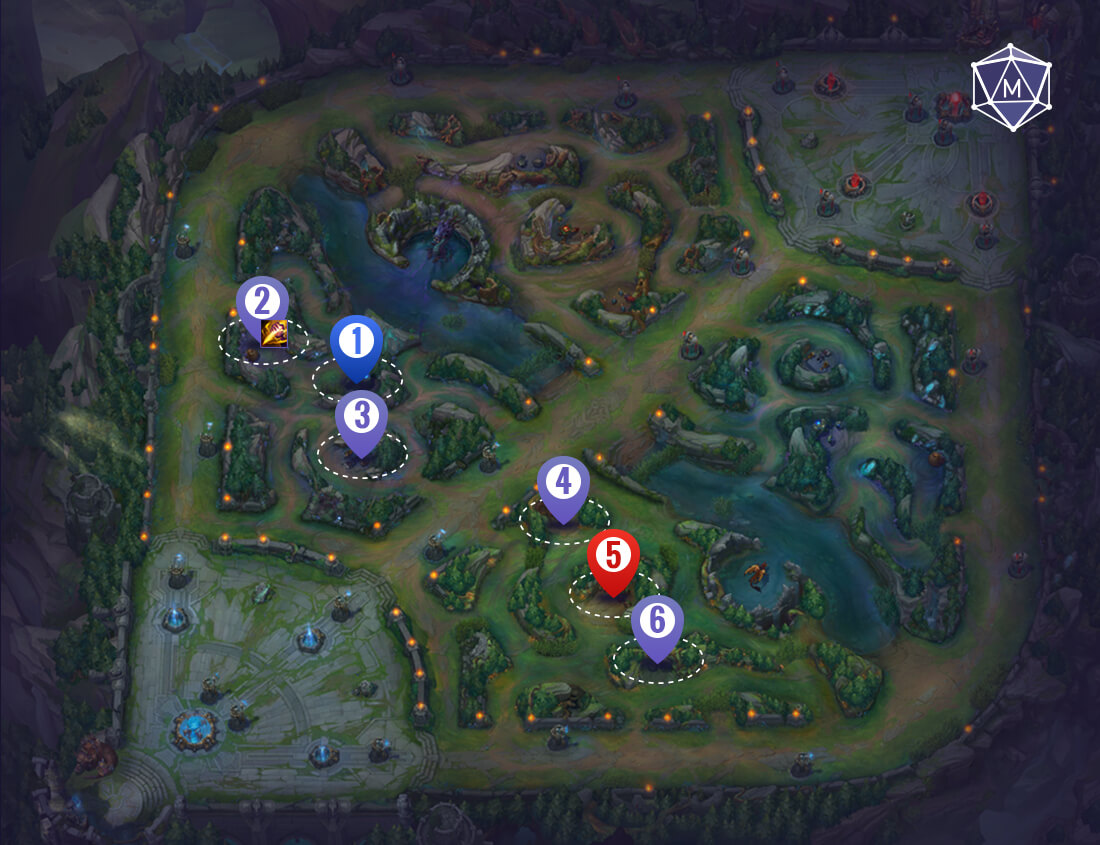 Q on single targets. It will allow him to finish objectives pretty quickly once he gets some items.

Level 6 is a significant power spike as it allows him to stack up his rune, as well as finish off enemies who have managed to escape with a sliver of health.

Once Karthus gets his first item component, he will spam his abilities frequently due to the increased mana. His damage will increase as well and will allow him to gain an overall lead in the game.

R. The damage is increased significantly, mainly if has managed to procure some items along with it.

Q will be maxed out. Anyone who is caught out by Karthus will take a massive chunk of damage and will probably even die if they are singled out by Karthus.

Karthus can control a large part of the lane during the mid-game and pick off enemies with his ranged abilities. He can even slow enemies with his wall, which allows his team to collapse and initiate fights.

Karthus is really good during the late game. His abilities will hit like a truck due to his items. His Ultimate

R will be pivotal to winning the game.

Once he gets 3 points in his Ultimate

R, it will allow him to half-health squishy enemies easily. This means that anyone who is behind on the enemy team will suffer a lot.

At this stage of the game, Karthus would've maxed his

E. His damage output in team fights will be very high.

Join other Karthus mains and discuss your favorite champion!