R
Get everything you need for Shaco Jungle build! The highest win rate Shaco runes, items, skill order and summoner spells in patch 13.1.

How good are you at playing Shaco?
Get insights on win rate, KDA, and other metrics on your favorite champions!
Shaco Strengths & Weaknesses
Strengths

He isn’t only a threat on a physical level, but the mental warfare he instills upon the enemy squishies allows Shaco to make multiple plays which other Champions can’t make. He can leave the lane and roam quite easily to get a cheese gank off (even if he is laning).

W can allow him to disengage as well as surprise all-in champions easily. This also acts as a counter to carries who have dashes and rely on kiting to win fights.

Q allows him to get out of sticky situations with ease. When combined with his Ultimate

R, his enemy can be baited to attack the clone and CC the enemy team/champion that attacked it.

Falls off like a truck if the game goes on for too long. During the late game, champions start building defensive items which don’t allow Shaco to immediately assassinate someone.

He is quite squishy, and is quite prone to getting killed if CC’d when his Ultimate

R is down. He will need to play around this ability in order to succeed.

Not a good pick against tanks as it would involve him changing his build and going up close and personal to those tanks. This is not very ideal, especially against experienced players.

You are really good at securing objectives in the early game. Look to secure objectives whenever they’re up.

Look for picks in the later stages of the game. If you can pick someone off, you should be able to rotate to the Baron or Elder Dragon. 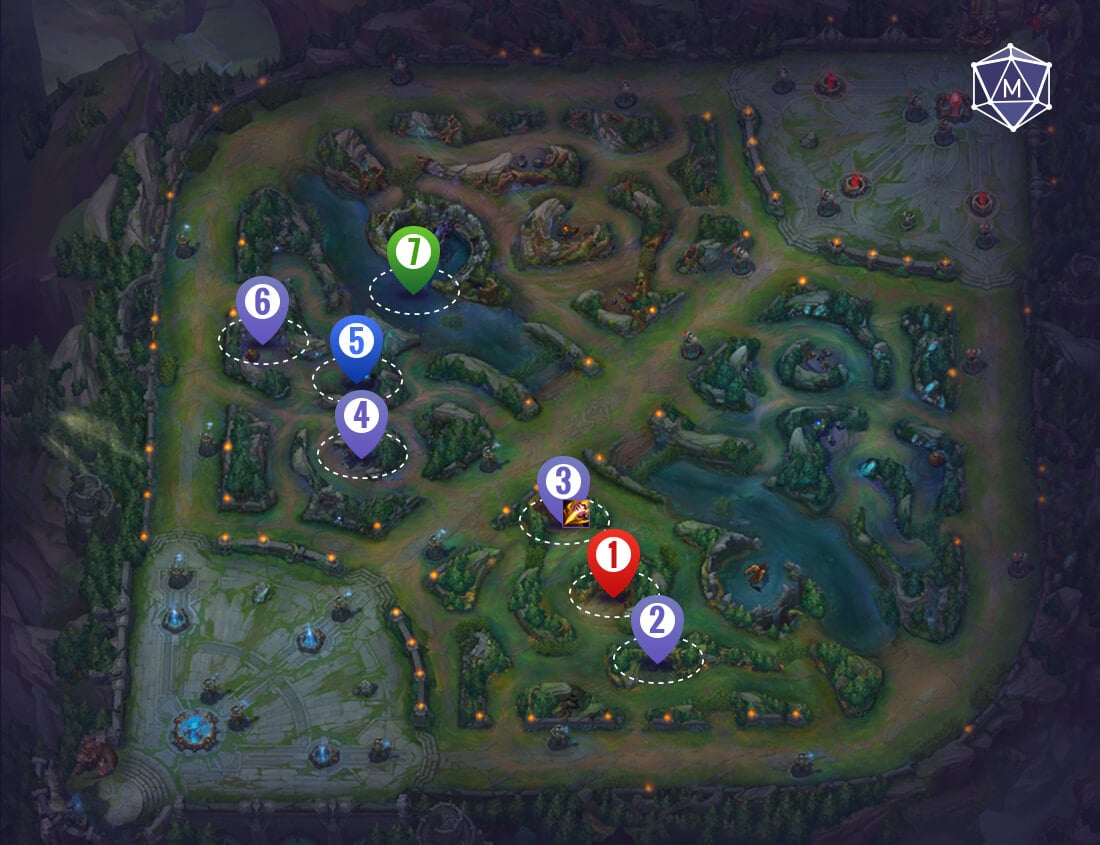 His early ganks are extremely strong, mainly due to his Summoner Spell choices. The enemy will have to invest in tracking him, else they are in for a world of pain.

Level 6 is an excellent spike as he can now bamboozle enemies with his clone. It will be challenging for the enemy team to be grouped up now.

The damage dealt to enemies will form a pivotal spike for Shaco. The first item component will help him with his dueling potential and clear speed.

The first ability will be maxed out at level 9. This ability will now hit like a truck, and he can quickly assassinate enemies if they are low.

Shaco is pretty decent during team fights. This is mainly because his clone can cause all-around mayhem for the enemy team. His ability to sneak behind the enemy team is phenomenal.

Team fights will become better for Shaco. Another point in his Ultimate

R will let him use the ability frequently and increase the clone burst damage.

R will confer the benefits of a lower cooldown and more significant burst damage of the Shaco clone. It will let Shaco one-shot enemies if they destroy it while it is in their vicinity.

He will be dealing a lot of damage to the enemy team now, especially the squishy targets. He has the potential to one-shot low health, immobile, and squishy targets quickly now.

Shaco is pretty decent in team fights due to his clones and the short cooldowns on his abilities. He can quickly get rid of critical carries due to his

Q and set traps for the enemy team using his Ultimate

Join other Shaco mains and discuss your favorite champion!

Qiyana
Empress of the Elements