How good are you at playing Bard?
Get insights on win rate, KDA, and other metrics on your favorite champions!
Bard Strengths & Weaknesses
Strengths

His roaming potential is unrivaled as he can almost always get to another lane more quickly than his counterpart, as well as get out of sticky situations by using his

The ability to sustain both his ADC and himself with his

W, while also getting more mana from collecting his Passive chimes allows him to stay in the lane for a long time. Due to his Passive, he can quickly switch between staying in lane and roaming.

R can help his team initiate a fight and set up a wombo-combo, especially when Bard manages to follow his Ultimate up with his

Q. This ability can also be used to stall neutral objectives and disengage if need be.

Q in the lane will give the enemy bot lane a long window to all-in and kill you. You are very squishy initially and can be burst down easily when hard CC'd.

R usage needs a lot of refinement when you are just picking up the champion. This is because one misplaced Ultimate

R from your end can lose you an entire team fight. His skill curve is massive and is quite hard to overcome.

Getting caught out with your

E on cooldown, especially during the early game will get you killed. Besides, if you keep roaming, chances are that your ADC will fall massively behind and will get killed frequently, especially if you are in a low elo bracket.

Q. Hold onto your

Q till you get a bit closer to your target, or use it when the target is pinned against a wall.

Keep collecting chimes while you are laning. You need to unlock the slow on your auto-attacks and getting 5 chimes will allow you to do so. Once that is done, you can land your

Always be on the lookout for roams around the map. The best time to do it will be when the minion wave is pushing to you and you have left lane to collect some chimes. Use your

E properly and maybe pair up with your Jungler for maximum effectiveness.

Once you reach this stage, you should focus more on roaming and impacting the map with your Ultimate

E. When deep warding, make sure you keep your

E ready to escape out of any sticky situations.

Before leaving your lane, drop some

W shrines here and there. This will help your ADC stay healthy, especially when they are up against a poke lane.

E and then stun them with your

Q. Pairing up with your Jungler/other laners will yield maximum effectiveness and the enemies generally don't anticipate such plays.

You should be focusing on catching enemies out with your Ultimate

R at this point. Playing the role of the disruptor, you should always be on the lookout for neutral objectives as your Ultimate

R can stall an objective long enough for your Jungler and team to do something.

Don't forget to collect your chimes regularly. They increase your damage output and you can quite literally 1 v 1 squishy champions if you collect enough of them. Besides, your auto-attack AoE slow will play a major role during team fights.

During objective fights, always try to CC the enemy Jungler due to them possessing the Smite summoner spell. This will give your Jungler ample time to steal the Baron. Another thing you may want to do is use your Ultimate

R to cancel recalls on a bunch of enemy targets. This works like a charm when your team has a split pusher.

How to Play Bard 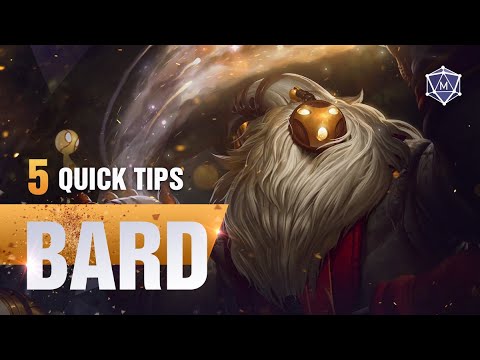 Bard’s first power spike is once he hits level 2. As long as you’ve picked up a few meeps before the minions spawn, you will always hit level 2 before the enemy. Make sure you harass and play aggressive while the enemy is still level 1.

Once Bard has picked up Boots, his roaming potential increases dramatically. Look to roam frequently with your

E to help your allies around the map.

Bard’s next power spike in lane is his level 6. His Ultimate

R is pretty versatile and can be used to set up plays with your Jungler. Ensure you throw the Ultimate

R behind the enemy as they may walk into it while trying to escape.

During the mid-game, Bard’s abilities will be on a lower cooldown. His

Q will be on a rather short cooldown, which will allow him to look for more picks throughout this stage of the game.

Unfortunately, while most champions spike at level 11, Bard isn’t really one of them. While his Ultimate

R will be on a shorter cooldown, it doesn’t deal any damage and will most likely be used to get picks or save his allies.

Bard should’ve picked up a lot of Meeps by now. His Passive and empowered auto-attacks will be very useful at this stage of the game. He will be able to consistently bully the enemy as he moves around the map.

Once again, when Bard puts another point in his Ultimate

R at level 16, he will not necessarily spike as his Ultimate

R doesn’t deal any damage. But, it will be on a shorter cooldown which can enable him to get picks.

In the very late game, his abilities will be on much shorter cooldowns. This is very useful for Bard as he will be able to use his

Q multiple times in a team fight. This alone may either win his team the fight or help him peel for his carries.

The effects of Bard’s Chimes or Meeps gets better and better as the game develops. In the late game, his empowered auto-attacks will deal a considerable amount of damage and have a huge slow if you auto-attack an enemy champion.

Join other Bard mains and discuss your favorite champion!

Sona
Maven of the Strings