R
Get everything you need for Kassadin Mid build! The highest win rate Kassadin runes, items, skill order and summoner spells in patch 13.1.

How good are you at playing Kassadin?
Get insights on win rate, KDA, and other metrics on your favorite champions!
Kassadin Strengths & Weaknesses
Strengths

Post-six, he can start avoiding ganks and can roam around and try to get kills. Once he gets the snowball rolling, it is very hard to stop him, especially if he hits level eleven.

Excellent burst damage potential on a mispositioned enemy. This becomes extremely strong from level eleven, and can practically one-shot targets.

Due to his Ultimate

R and his item spikes, if he manages to get some kills early on with the help of his Jungler and Support, he will completely take over the game effortlessly.

His early game is very weak and he can be killed countless amounts of time during this phase. If he isn’t able to get his item spikes early on, he will take quite some time to come online.

Can be easily camped during the entirety of the laning phase. This can hamper him from CS’ing and will set him back massively.

Extremely weak against all-in champions, especially ones who have dashes or blinks. He is also vulnerable whenever he doesn’t have Flash early on, hence proper wave management can really be devastating for him.

Play safe in the early game. You need time to come online and if you fall behind, you will struggle to lane and you will delay your first major power spike.

Focus on power farming and minimizing trading until you’re level 6. Once you unlock your Ultimate

R, you can start to be more aggressive.

Once you’re level 6, you can look to play more aggressive as you can use your Ultimate

R as a trading tool and something to fall back on.

Powerfarm in the mid-game. You need to earn as much gold and XP as possible so you can level up quickly.

Avoid fighting too much in the mid-game. It’s better for you to only fight when it’s going to work in your favour. Focus on farming rather than fighting.

Split up and farm the side waves once your ADC and Support have rotated to the mid lane.

Group in the late game and stay with your team. If your team is good at team fights, stick with them.

If your team isn’t ahead or not very strong, you could try to split push and draw the enemies attention while your team sieges an objective elsewhere or does the Baron.

Kassadin is very good at getting picks thanks to his Ultimate

R. Look for picks in the late game to get your team ahead. Capitalise on the numbers advantage by pushing and taking objectives afterwards.

How to Play Kassadin 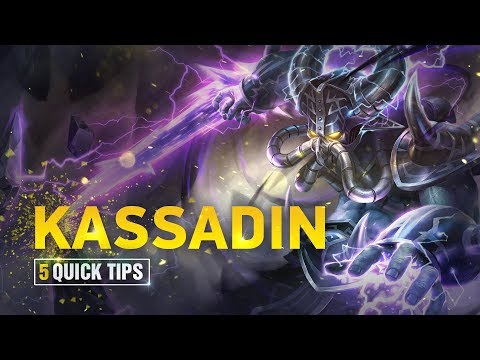 Kassadin is weak early on as he can't get too close to his opponents to burst them down. This is mainly because of a lack of mobility and items until he hits level 6. To compensate, he should play safely and rely on proper vision setup to not die often.

At level 6, Kassadin will unlock his Ultimate

R. That is his first significant power spike as he can now dash to or away from an enemy depending on the given situation. As the game progresses, this ability will play a pivotal role in Kassadin's success.

Once Kassadin gets his first item, he should deal a lot of burst damage to his enemies. Bonus points if he can shove his wave in and look for kills on other lanes. It will give him a considerable boost.

Kassadin will have 2 points in his Ultimate

R at level 11. This will reduce the ability's cooldown and will let him deal massive amounts of burst damage to the enemy.

His first ability will be maxed out at level nine, which will give him a boost to his damage. It helps when it comes to dealing with ganks and all-ins.

Kassadin will be a monster if he is ahead on items or kills in this game phase. Otherwise, he won't be having a lot of impact on the game.

Level sixteen is the most essential power spike for Kassadin. This allows him to use his Ultimate

R frequently, which can cause a lot of mayhem in the enemy team.

Kassadin will be dealing a lot of damage during this phase of the game. It will let him take off huge chunks off the enemy's health bars, which will allow him to win the game for his team.

His presence in team fights will be really high, especially if he manages to get a flank on the enemy team. His ability to barge in, burst enemies down, and get away is phenomenal.

Join other Kassadin mains and discuss your favorite champion!

Ekko
the Boy Who Shattered Time