How good are you at playing Diana?
Get insights on win rate, KDA, and other metrics on your favorite champions!
Diana Strengths & Weaknesses
Strengths

Diana is really good in team fights because her Ultimate

R is a large AOE tool. She is really good in team fights.

Diana’s 1v1 potential throughout the game is very high. She can 1v1 most enemy Junglers to gain an early lead.

Possibly one of the best flankers in the game. She can take out the enemy backline almost instantaneously during a team fight if she is left unchecked. Besides, if she happens to get caught, her tankiness and defensive items will keep her alive for quite some time.

Proper warding from the enemy team can diminish Diana’s flanking potential in team fights as she will be detected by the enemy in time. This can really reduce her ability to team fight.

When ganking an enemy, if she misses her

Q, her gank will most likely fail as she will be unable to use her

E twice. She will also miss out on a lot of extra damage.

Unfortunately, Diana relies on getting ahead. If you do not get ahead on her, the likely hood is that you won’t be strong in the later parts of the game.

She should start ganking as soon as she hits level three as her burst damage is relatively high, which will allow her to quickly get a Flash from the enemy champions' side.

R will make her quite dangerous in fights that happen around choke points. This helps her teammates a lot as they can easily collapse on the enemies Diana has Ultimate

Her first item will allow her to get a massive boost in her overall damage. This will let her win duels with ease. She will now invade the enemy Jungle, provided the allied laners have prio in their lanes.

Her win condition will be getting off massive Ultimate

Rs off on the enemy team. Poking them out with her

Q first and then going in for the kill is quite optimal for her. Bonus points if she can do it from the fog of war.

She should be able to one-shot enemies with ease from now on. Her main goal will be to fight around clumped areas to get a multi-man Ultimate

R on the enemy team.

She should still focus on the enemy backline during team fights while avoiding any form of CC on her. Picking off enemies to make team fights unfair should also be an excellent way to snowball her lead.

If Diana is ahead, she should look for picks or ambush the enemy as they walk through their Jungle. Taking one enemy down could be enough to win the next fight or take the Baron. 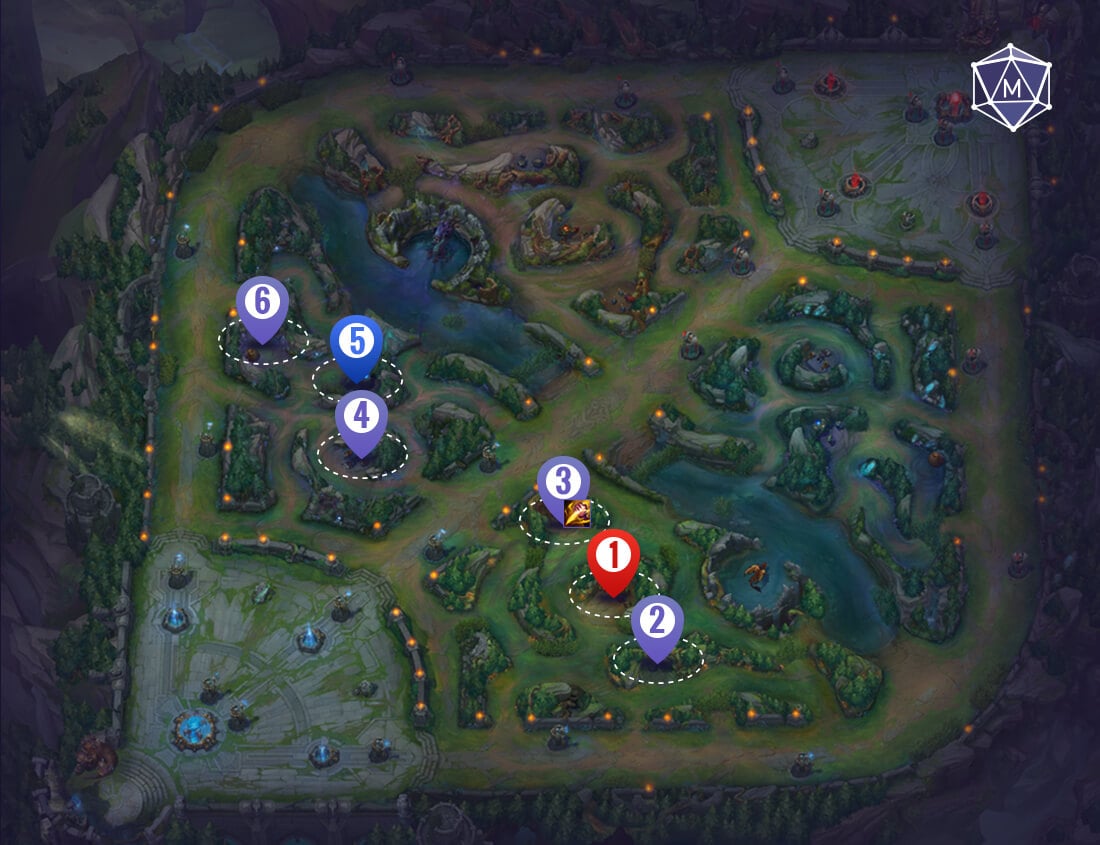 Diana can start ganking from level 3 onwards, but the more levels behind her the better. She should avoid over forcing ganks if they’re too risky so you don’t fall behind.

Level 6 offers Diana lots of burst damage and CC. Because your Ultimate

R is such a strong tool, make sure you’re trying to gank whenever it’s available.

When Diana has completed her Mythic item, her 1v1 potential is incredibly strong. Don’t be afraid to fight the enemy Jungler alone if you have the item and level advantage.

During the mid-game, Diana would’ve maxed out her

Q. This ability should start doing a lot of damage to enemies. It will also help her clear the jungle and secure objectives with her team.

At level 11, Diana will put the second point into her Ultimate

R. Her damage output in team fights will be very high, especially if she has a few items or a lead over the enemy Jungler.

As Diana has an assassin playstyle, once she has multiple items completed in the mid-game, her burst potential will be highly potent. She will easily be able to take down squishy targets that are walking around Summoners Rift alone.

In the late game, Diana should be near full build. Make sure you play around your active items and your Ultimate

R to deal the most amount of damage in a team fight.

Teams will be grouping in the late game, and as Diana’s Ultimate

R is an AOE tool, she will deal a lot of damage to enemies that are grouped closely together.

At level 16, Diana would’ve put the third and final point in her Ultimate

R. She will now deal a considerable amount of AOE damage to any enemies caught up in it.

Join other Diana mains and discuss your favorite champion!