The Sorceress is the quintessential mage archetype in Lost Ark. If you have ever played a Sorc in Diablo 2 or 3 or even a Combustion Fire Mage in WoW, you will feel right at home.

They are known for being able to do a ton of damage safely from afar, as well as control areas of the battlefield with their spells and status effects. Of course, given that they have so much that they can do safely at a distance, they are squishy.

To learn about the other Mages, check out our guides for Arcanist and Bard

Sorceresses build up their meter by doing damage with their spells. You have a few options on how to use it.

One is activating Arcane Rupture any time you have 30% or more filled up. This gives you increased casting speed and damage on your spells.

If you are at 100%, you go into a more powerful state that amplifies that effect. In fact, it's really not recommended to activate this before then because of how powerful Arcane Torrent is at 100%

You can also spend 30% of your bar to Blink. This is a long distance movement spell that teleports you instantly to that location. 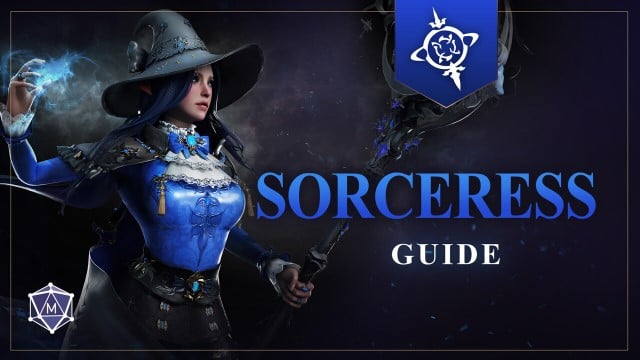 Every single Sorc spell has an AoE component and many of them can wipe out hordes in a single cast. Some of the harder-hitting ones are used as primary single target damage spells. Major damage spells have cast times, although you can often spec to remove the cast time for a slightly weaker output.

The Sorceress’s fire spells have Destruction (weak point) attached to them and the class has a respectable amount of stagger, although definitely not top tier compared to a class like Scrapper or Gunlancer. Many of their spells have status effects attached to them, such as Burn, Ignite, Freeze or Electrocute which help you control the battlefield.

If you are looking for a class that can do lots of damage through huge burst or consistent damage spam, while being safe and far, look no further. Sorcs are easy to pick up and play because of their lack of attack positional requirements, but they are difficult to master so you can find a lot of nuance that may appeal to you.

You will spend most of your time as a Sorc alternating between your instacasts and waiting for windows to cast your bigger spells depending on which playstyle and spells you choose. You will also pay attention to your positioning to set yourself up for succeeding by using your movement ability thoughtfully to dodge boss attacks. Don’t lose sight of the main reason you are in the group - to do tons of damage!

In PvP, Sorcs would be wise to stay away from long cast time spells and focus on spells that can do small amounts of consistent damage safely. By combining consistent damage with the ability to control the battlefield through AoE status effects, a good Sorc can set the tempo for the match.

The bane of any Sorc is good melee, sticking to you and chasing you, especially Deathblades. By using your mobility wisely and coordinating with your team, you can play keep away and continue to be effective with your instacasts.