Get best Sett Jungle guide directly in your client! Learn how to play Sett with tips from Challengers experts. Learn more

How good are you at playing Sett?
Get insights on win rate, KDA, and other metrics on your favorite champions!
Sett Strengths & Weaknesses
Strengths

Sett is great in extended trades thanks to his

Q. As long as he can stick to an enemy champion, he should win 1v1 fights.

R allows him to both get tanks off his carries as well as deal a lot of damage to the enemy team if he manages to ult his target into them. This can change the tide of a team fight in an instant.

His Passive allows him to regenerate a lot of health so he can resort to short burst trades against enemy champions unlike other tanks. His

W does deceptively high damage as well, while providing damage mitigation to him.

Can be kited to oblivion, especially when he is against a ranged carry with some form or dash or peel.

W can get him killed as it is his only form of damage mitigation. He can’t escape easily if someone all-ins him after he uses this ability.

If the enemy is smart, they will avoid grouping up during fights. This will prevent Sett from using his Ultimate

R effectively, as he won’t be able to land a lot of damage or slow multiple members of the enemy team.

You will want to get to level 3 quickly and utilize the fog of war to gank overextended enemies. This will allow you to get a quick early lead which you can capitalize on later on.

W will be of paramount importance in this game. Make sure that you time it correctly, as it can be the difference between a won and a lost fight.

Always try to gank pushed-up enemies but make sure that you are not on the opposite side of the map when a neutral objective is about to spawn. Otherwise, you will lose an easy objective.

During the mid-game, you want to gank as much as possible and keep accumulating a lead. Your

W will be critical abilities that need to be appropriately timed.

R will let you get kills and a lot of damage off on grouped enemies. Use it to ensure that the enemy frontline isn't able to get onto your backline.

Make sure you get as many neutral objectives as possible while relying on picks to win the game. The goal is to get rid of the enemy Jungler before doing anything.

R, be prepared to fall back and peel for your allies in late-game team fights.

To get on the enemy's backline quickly, try to use the fog of war to flank the enemy. If you flank from an unwarded bush, the enemy will find it harder to react to your all-in. Avoid splitting or being away from your team in the late game, as the enemy will force a fight while you're gone.

Play around with your Ultimate

R is up. Fighting without it will make the late-game team fights much harder. Delay fights and be prepared to disengage if it's still on cooldown. 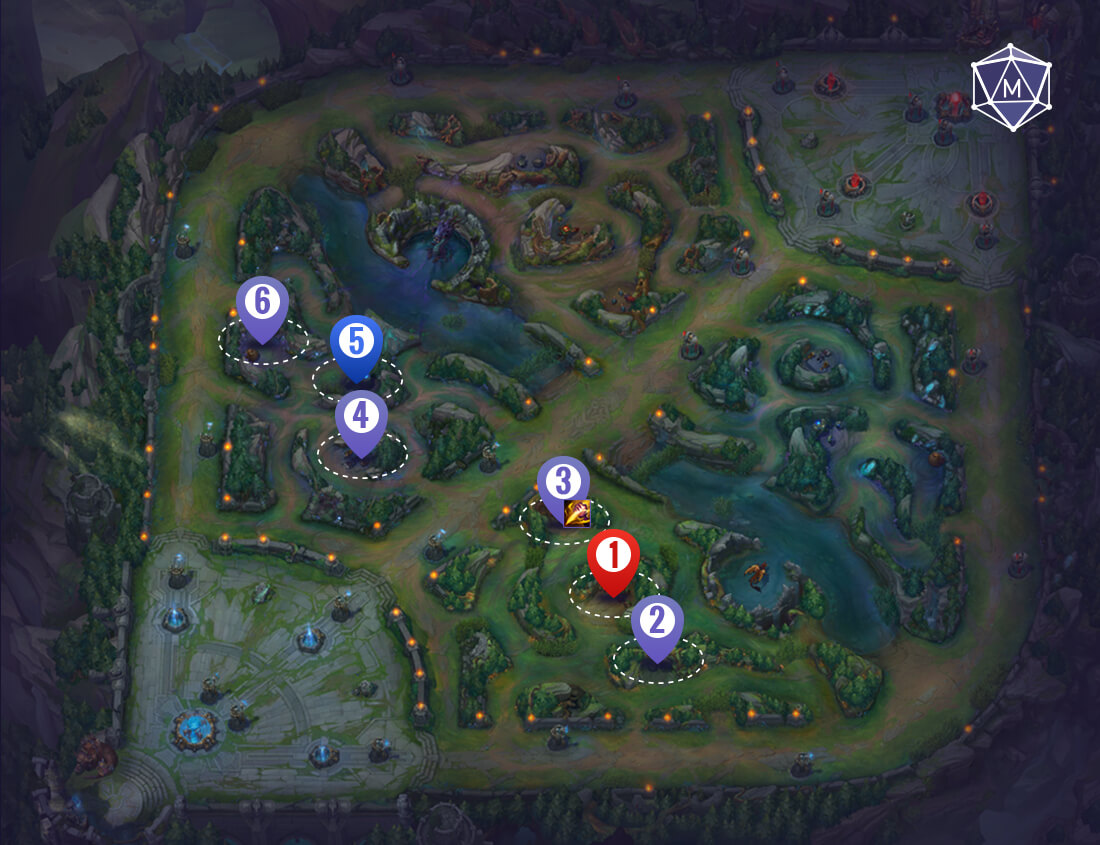 His early game ganks are quite decent during this phase of the game. His

E should let him get to his enemies quickly.

Level six is a massive power spike as it allows Sett to pick off one enemy and separate them from the team. He will want to suplex a tanky enemy into the enemy team, though.

The first item component will increase his overall capability to fight and survive. His

His first ability will be maxed out at level 9. This will let him deal massive amounts of damage during ganks and mid-game fights.

His team fighting is quite potent during this phase of the game, especially if he gets a multi-man

E on the enemy.

R will let him do more damage with the ability. It is necessary to ensure that he tosses the target in the proper direction.

A maxed-out Ultimate will be up frequently, and clumped team fights will become a breeze during this portion of the game.

His damage is massive during the late game, especially with his

W. He will have to use it at a proper time for maximal effectiveness.

He is a decent team fighter during this phase of the game. He can regenerate his health quickly because his Passive and his

Join other Sett mains and discuss your favorite champion!

Xin Zhao
the Seneschal of Demacia