How good are you at playing Ekko?
Get insights on win rate, KDA, and other metrics on your favorite champions!
Ekko Strengths & Weaknesses
Strengths

W allows him to engage upon a group or enemy champions, or a single enemy champion with ease. This is really beneficial if he can land it from out of vision and then use his

E to dash into the

W circle to guarantee the stun.

His burst damage is not to be ignored as the game goes on. This is especially true when he happens to be ahead in the game. He can quite literally take the enemy backline out in one rotation of spells, if he manages to

R is the most powerful ability in his kit as it allows him to undo his mistakes, especially when he chooses a bad fight or fails an all-in. As the game goes on, the cooldown of this ability becomes shorter, allowing him to do whatever he pleases as long as he has his Ultimate

As Ekko is a melee champion, he will get bullied down by the superior range from other Mid laners. He must not let them bully him down otherwise he’ll fall behind in gold and XP.

Common flanking spots can easily be warded by the enemy team, reducing Ekko’s flanking potential. Ekko will have to devote some time to clearing wards if he wants to be successful in picking off enemy champions.

Ekko is prone to CC. If he gets hit by layered CC, it's going to be difficult for him to deal damage, use his

W or escape the fight with his Ultimate

Play safe for the first few levels. While Ekko’s early game is strong, you need to remain healthy so you can look for an all-in after you have more levels under your belt.

Ekko has strong roaming potential and is a strong skirmisher. Get priority in your lane and then look to roam and assist your allies.

W. It is a strong tool that can help win fights and outplay the enemy. Always keep this ability in mind when you’re fighting the enemy.

After your bot lane has moved to the mid lane, rotate to the bot side of the map or somewhere else on the map so you can continue to farm and gain XP.

Flank in team fights with your

E to make getting on the enemy backline easily. Make sure you’re near your team at all times so you can get in the fight fast.

As you’re good at getting picks and killing isolated targets, try to ambush and assassinate enemies who are alone or walking around Summoners Rift alone. After killing someone, make the call for a nearby objective.

Stick with your team in the late game. Do not split up or walk away from them otherwise the enemy may try to pick you off or initiate a 4v5 fight when you’re away from your team.

Avoid fighting in the late game unless your Ultimate

R or Zhonya’s Hourglass is up. Do not fight or skirmish with the enemy until they’re both up. Getting killed could cost you the game.

Play on the side of the map that has the next major objective up so you can rotate to take it with your team. Alternatively, if you have Teleport, you can go to the bot side of the map and use it to get to your team.

How to Play Ekko 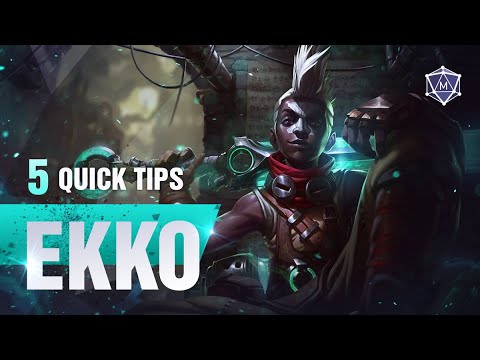 When Ekko hits level 3, he can start to look for aggressive plays as he would’ve unlocked all 3 of his basic abilities. Until that time, he can fight, but he will unlikely gain any significant advantage.

As Ekko can deal a lot of burst damage, once he has completed his Mythic item, his kill pressure intensifies.

At level 6, Ekko becomes an incredible threat. He can go for risky plays and use his Ultimate

R to escape. His Ultimate

R can also be used aggressively, which makes it incredibly versatile. You can look for riskier all-ins post 6 as long as you cast your Ultimate

During the mid-game, Ekko will have completed multiple items. He should be a lot stronger at this stage of the game.

Combined with more items, at level 11 Ekko will put an additional point in his Ultimate

R. He will be able to look for more aggressive and risky plays.

At level 9, Ekko will max his

Q. It will help him farm and trade with the enemy.

R will deal a lot of damage and be on a really short cooldown. He can look for insanely aggressive plays whenever it is up.

Multiple items offer him low cooldowns and a lot of burst damage. Don’t be afraid to go for plays.

Teams will group closely in the late game. This is good for Ekko because it can allow him to get a multi-person

W off and CC the whole of the enemy team.

Join other Ekko mains and discuss your favorite champion!